Latest updates from the campaign:

I want to thank everyone who turned out to vote. It was very close, 750 - 735. I am looking forward to serving for another four years. Joe Sawyer ran a good campaign. I sincerely hope he will continue to be involved in our community.

Though Aulbach finished with the most votes, she did not receive more than half of all votes cast, setting up a runoff election with Sawyer on December 5.

The unofficial vote figures are according to Elections Superintendent Kym Chereck.

I thought I would share some links so you can compare the candidates for the Post 4 council seat.

If you were unable to  attend the candidate forum, you can watch it in full here. Thanks again to UPCCA for hosting this and making the video available so all can  watch and compare the candidates.

The city has begun work on a city wide trail  system. While this will take many years to complete, work has begun on the first section running through Technology Park. We are looking for a great name for our trails. This is an  opportunity to have input into the naming process.

A note from Alex Wright about this rezoning application:

The UPCCA just announced a Land Use Meeting on 6 November at PCBC.

I would strongly encourage you to attend this meeting on 6 November and to share this information with your neighbors. 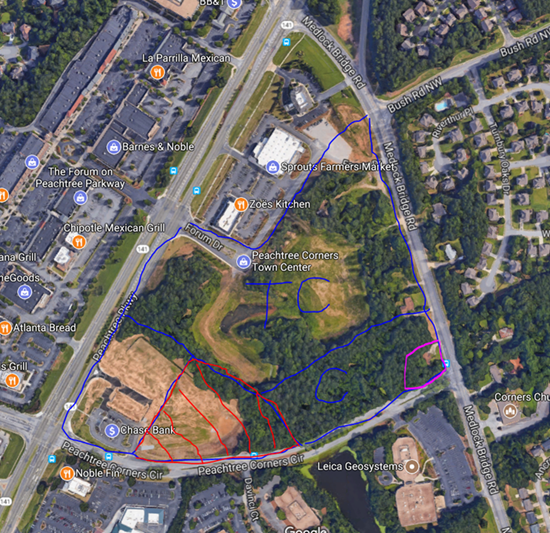 The Peachtree Corners City Council recently approved the 2017-2022 Economic Development Plan. The council, city staff, and Downtown Development Authority worked in conjunction with citizen input to develop the plan. Economic Development Specialist Jennifer Howard compiled the results from 259 surveys from businesses (about 11 percent) and interviewed 10 of the city’s top employers to help shape the plan.

I was very excited to attend the Annual Environmental Address and Luncheon hosted by Gwinnett Clean & Beautiful. Especially when we were honored with this award. The city’s Green Committee was founded on my initiative with assistance from the Mayor, my fellow council members and our great staff. This committee was instrumental in achieving our Green Communities Certification. The city has implemented other initiatives as well, leading to the Green Government award.

Good news, additional sidewalks are planned for Peachtree Corners in 2017. Following are four projects that will add nearly 2,600 feet by the end of the year.

1. Peachtree Corners Circle – approximately 2,000 feet of sidewalk will run from Peachtree Parkway (near Noble Fin restaurant) to the intersection of Medlock Bridge Road.

4. Frank Neely Road – A new sidewalk will be installed between Dove Field Court and Spalding Drive.

Many of you have seen the improvement in southbound traffic at Holcomb Bridge from the addition of a merge ramp onto 141/PIB. You have also observed progress being made by the state at the I-285 eastbound ramp at 141/PIB. Work there is expected to be completed in February 2018. The city is in negotiations with other highway authorities to widen 141/PIB to four lanes in both directions between I-285 and Jimmy Carter Blvd. Once complete, this should greatly relieve congestion in that corridor. There is no date yet for this project but I will keep you posted as we get more information.

This was a big step forward in creating an Innovation Hub in Technology Park. The need for Millennial/Workforce Housing in Technology Park was brought to our attention first by Tech Park businesses who need young tech workers. The need was also highlighted in our Livable City Initiative study. This project will open up the lakes in Tech Park to our community. Land was also contributed to our planned trail system.

Company moves from ITP to Gwinnett, brings 350 jobs along with it

Partnership Gwinnett and CGS — “a global provider of business applications , enterprise learning and outsourcng services” — announced Monday that the latter had moved to the city of Peachtree Corners. CGS’ Atlanta-area location was previously in the Perimeter Center area.

Work is underway to transform a famous but aging office park in Peachtree Corners into a center for business innovation.
Technology Park Atlanta (nicknamed “Tech Park”) was established in 1968 as the office component of Peachtree Corners, the mixed-use planned community in Gwinnett County created by Atlanta real estate icon Paul Duke.

Peachtree Corners will pick up debris from Irma for free

Great news about our Town Center.

And another election result article in the Gwinnett Daily Post.

Here is an article on the election results from the Patch. We had just gotten the final results!

Thanks to everyone who supported and helped me through this journey. We made it to the finish line and we won! What a journey! And it isonly beginning.

The election results are in. I am in runoff. I will need your help in the coming weeks and your vote on April 3rd.

Here is an article in the Gwinnett Daily Post on the recent City COuncil Candidate Forums.

What is the Process for Requests to Change Existing Zoning

I blogged about Planning and Zoning, the process involved whan a change is requested to existing zoning.

Blog on taxes and Franchise Fees

Here is a blog that talks about property taxes and franchise fees and how they will impact you.

A blog on my campaign.

Blog on the Patch on the recent UPCCA Candidate Forums

Here is an interview with the AJC.

Jeanne responded to the questionnaire from the Peachtree Corners Ballot Committee.

Response to the Patch